More than 200 LGBT civil servants and allies marched as part of our Civil Service marching group. The group, which represented staff from dozens of government departments and executive agencies, is the largest ever showing of LGBT diversity from the Civil Service at London Pride.

At the same time, civil servants were marching at other Pride events across the world.

Are you ready New York? The Brits are coming! UK Government proud to be marching in #NYCPride this Sunday #LoveWins pic.twitter.com/MudsKtfomq

Even Palmerston, the FCO’s Chief Mouser, joined in the celebrations.

Even Palmerston is getting ready to celebrate #PrideinLondon! Hope everyone has a great day. #beyourself #Pride2016 pic.twitter.com/z1b3gtwQW2

3 permanent secretaries joined us too

Great to have Permanent Secretaries from Department for Culture, Media and Sport, Ministry of Justice and Department for the Environment and Rural Affairs here at London Pride! #BeYourself #ChampionDifference #OurCivilService

We were thrilled to be joined by 3 permanent secretaries at the parade this year: Richard Heaton (Ministry of Justice), Sue Owen (Department for Culture, Media and Sport) and Clare Moriarty (Department for the Environment and Rural Affairs).

Having support from 3 of the Civil Service’s most senior leaders is really important. When people see their leaders championing difference, they feel comfortable being themselves and challenging the barriers put in front of them.

20,000 people working in the Civil Service are LGBT; we want them to be able to feel safe and proud at work so they can give their all and get the most from their career in government.

That’s why this year we adopted a theme: #BeYourself. We want to encourage everyone to create a Civil Service that champions difference so everyone can be themselves at work. 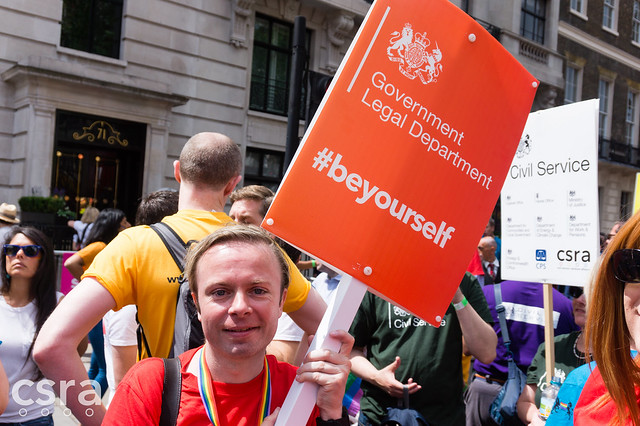 In a blog post on GOV.UK earlier this week, Sue Owen, the Civil Service LGBTI Diversity Champion, reminded us that we have a lot to be Proud of as a Civil Service too:

The Civil Service has a lot to be proud of in driving that progress forward. The work we do every day has an impact on the lives of millions of people across the country. The decriminalisation of homosexuality, equal marriage rights, the Equalities Act: none of these would have happened if it weren’t for the tireless efforts of civil servants. We’re not often in the limelight, but we are the reason our country is seen as great country for LGBTI people to live, love and work in.

Pride is time to reflect on how far we’ve come, but also how far we have to go. We marched to show that the Civil Service is a diverse and inclusive employer; and that we need to continue to be that, because if we don’t invite a diversity of opinion, we won’t deliver for the public we serve.

The message from today: #BeYourself and love one another. pic.twitter.com/5GMFion2AU

We took lots of photos

If you were with us at Pride in London at the weekend, you can find all the photos from the day on Facebook or Flickr.